As with all SGS versions, SGS-A is written with two key features in mind:
Using iOS 13 or earlier, this means that no graphics can be shown to the player, and the only way to interact is to select an option from a pre-determined list. (Future versions of SGS will take advantage of iOS 14's changes.) So, SGS-A serves as a game engine that creates a text adventure game out of a plain text file written by the game developer. SGS-A takes advantage of Shortcuts' integration with dictionaries to store information and present the game to the player. A dictionary is a particular formatting of plain text which allows the computer to to match up a list of player-presentable options ("Go North") with computer-readable results ("You Walk North~~N!~Stone Ring"). The most useful part is that the value of any given option can be another dictionary. A dictionary inside a dictionary. Add a couple layers of nesting, and now SGS-A can read through an organized hierarchy of data. Shortcuts allows you to pull a list of all the player-presentable options (called "keys") which can then be shown to the player to pick from. So the game writer can build a location, give it a description, and make a list of all the possible actions and their results. While playing the player sees the description and is presented with the Action Menu: 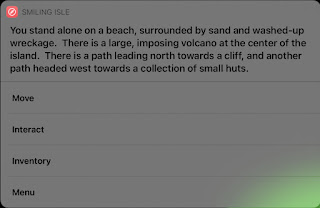 The Action Menu serves as a splash page for the given location. It provides the two main types of actions "Move" and "Interact", and also gives access to the player's inventory and the game menu.
The "Move" and "Interact" menus are effectively the same. Pressing one open up a list of possible actions at the given location. The movement menu lists places to go that will leave the location (go north, enter door, etc.), while the interaction menu covers actions within a location (pull lever, examine window, etc.). Either menu shows the player the description of the location and has has a back button for returning to the Action Menu.
The player can check their inventory at any location by pressing the "Inventory" option. It will list all of their items below the description of the location. Selecting an item will give a description of the item and present the option to "use item". This way, the player can use a key to open a door or a fishing rod to catch some food. If the item does not have any use at the current location, a standard "You can't use that item here" message will appear.
The "Menu" option gives access to all the meta-game actions. It shows the player's percentage of completion and allows them to save the game, load a save, and exit. SGS-A has support for 3 save files, stored locally in text form to the iOS Notes app. Selecting either of the save-related options will present them with the current status of the 3 save states, including their percentage of completeness. They can always overwrite an existing save slot.

The real key to how the Shortcut Game System works is its checkpoint system. This is invisible to the user but is the vital method for the game writer to communicate with the game engine. The checkpoints are tags that the writer attaches to a player after they have completed specific tasks. They can then specify different versions of a location based on what the player has accomplished. For example, a player can be in a room with a locked door and a shelf full of books. If the player pulls on the correct book, suddenly the locked door becomes an exit! To the player they haven't moved at all, but the game sees two different rooms. One with a locked door and one with an open exit. Pulling on the book had given the player a checkpoint that the writer used to denote versions of the room. There are no limits to how many checkpoints a player or a location can have. Additionally, the previous location the player was in is also treated as a checkpoint. That way, if it is relevant to a room which way the player entered, that can be taken into account.
Checkpoints also double as a method of keeping track of how much of the game the player has completed. Adding an exclamation mark to a checkpoint denotes it as important, and the player's percentage of completion is calculated by how many "!" there are in their list of checkpoints compared to the total number possible. There is no limit to how many "!" can be added to a given checkpoint.

The game itself, as noted above, is contained within a text file formatted so the computer can read it. for a more in-depth description of the formatting, take a look at the post called "SGS-A Game File"
SGS-A

Popular posts from this blog 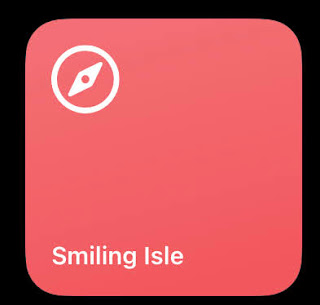 Smiling Isle Welcome, adventurer! Journey to an unknown island with a mysterious past to discover the secrets it holds. Well, you would, except you shipwrecked your way onto it and now you have to find a way to escape. Explore the island, learn its history, play with weird contraptions, and hope that maybe you can call for help. Smiling Isle is a text adventure game that runs on your phone without an app! It is designed to be a demonstration of what can be done with the Shortcut Game System that I built. It runs using Apple's built-in Shortcut app in iOS devices, and saves data locally using the Notes app.  To download, first make sure that you have "Allow Untrusted Shortcuts" turned on in your settings (Settings > Shortcuts > Allow Untrusted Shortcuts). Then just click the link below to download. It works best as a widget on your homescreen, so you don't have to open the shortcuts app to access it. When downloading, it will request access to your Notes app. Hi
Read more

SGS-A Game File Top Level Overview The text file for SGS-A games uses Shortcuts' standard dictionary formatting, seen below. Where the values are strings of text, they are surrounded by the quotes. Where they are sub-level dictionaries the quotes are not necessary.  {"Key 1":"Value 1", "Key 2":"Value 2", "Key 3":"Value 3", "Key 4":"Value 4"} SGS-A uses keys at the top level to match up game-specific information with variables inside the system. The top level keys are: Title Starting Position Checkpoint! Count Save File Tag Menu Message Intro Messages Credits End Game Dictionary Item Dictionary Location Dictionary The first 7 in the list are straightforward items that have to do with setting up the game for new players. "Title" is the name of the game. "Starting Position" is the starting state for a new game (formatted as described farther down). "Checkpoint! Count" is the
Read more